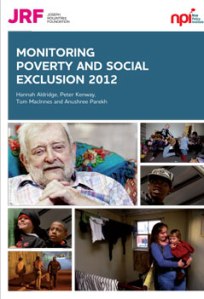 New research from the Joseph Rowntree Foundation (JRF) on poverty and social exclusion in Scotland has brought into stark relief growing health inequalities and a substantial increase in unemployment.

Monitoring Poverty and Social Exclusion in Scotland 2013 is JRF’s sixth assessment of poverty in Scotland. It uses the latest Government data and assesses a wide range of factors including unemployment, education, and health.

The research reveals genuine and growing problems that need serious action, including:

From now until the Independence Referendum in late 2014, the issue of independence will no doubt dominate the Scottish political landscape. At the moment, poverty is far from central to the independence debate, but it is important that it becomes so.

This discussion is, after all, about the kind of country Scotland wants to be, It must therefore cover areas that are central to tackling poverty – health, schools, childcare, benefits, taxes, work and pay, pensions, services, housing and more.

Although the Scottish Government already has powers over many of these areas, pensions and benefits are outside its remit.

The inevitably growing debate around independence must not obscure the need for on-going policy development in all of the devolved areas, to tackle problems that will exist whatever decision the Scottish people take in 2014.