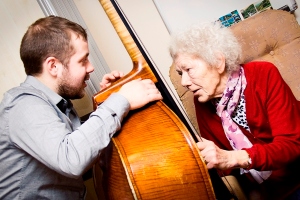 Highlights of the 2013 festival include two commissions by Luminate. Live Music Now is a UK wide charity that provides performing and training opportunities to outstanding young professional musicians who take their performances to a wide range of community settings. Bill Sweeney has been commissioned to create The Luminate Suite, based on music, poems and stories remembered and shared by older people from the Western Isles. During the festival, Live Music Now musicians will premiere the new song cycle for the older people who helped create it. The charity’s performers will also tour care homes and centres throughout Scotland as part of Luminate’s Outreach programme.

Recount, the second Luminate commission, will incorporate three site-specific installations on Shetland. During the Cold War, the islands played an important role in NATO’s Early Warning System, hosting the most northerly Royal Observer Corps bunkers designed to operate as monitoring stations in the event of nuclear attack. Artists Roxane Permar and Susan Timmins will explore islanders’ recollections of Shetland’s role in the conflict to create site-specific artworks incorporating text, sound and luminescent textiles.

Other Luminate highlights around the country include Super Vivere, an exhibition by photographer Susie Rea that uses stunning portraits, audiovisual narrative and text to explore the lives of siblings who are over the age of 90. The project is a collaboration with Dr Maeve Rea of Queen’s University, Belfast and both Susie and Maeve will give a Gallery Talk at macrobert, Stirling on 1 October marking the opening of both the exhibition and Luminate. The work can be seen at macrobert from 1 – 10 October before transferring to Platform, Easterhouse from 22 October.

One of the major performances of the festival is Theatre Ad Infinitum’s award-winning Translunar Paradise, which is also part of Dance Live at The Lemon Tree, Aberdeen and tours to Eden Court, Inverness, The Beacon, Greenock and Traverse Theatre, Edinburgh. This exquisite piece of mask and movement theatre, featuring live accordion accompaniment, tells the story of William, who escapes to a paradise of memories after his wife’s death but ultimately must learn to let her go.

A must-see at Edinburgh’s Royal Lyceum Theatre on 2 October is the Curtain Raiser on Dark Road with Ian Rankin when the author will discuss the inspiration for his first play with Jackie McGlone. Also in Edinburgh on 25 October, 24 Carat Gold, a choreographic group made up of members of Dance Base’s over 60s group, Golden, will take on a group of young dancers for a high energy performance at Dance Base.

One of Scotland’s treasures Jackie Kay will be at the Lochgelly Centre, Fife on 23 October, reading extracts, stories and poems from her latest book Reality Reality. Other performances of her work will also take place during Luminate. macrobert, Stirling will host a reading of the play Mind Away as part of their Exploring Arts and Dementia day on 25 October and her hilarious and heartbreaking new musical comedy, The Maw Broon Monologues, starring Terry Neason and Suzanne Bonnar opens on 29 October at the Tron Theatre, Glasgow as part of the Glasgay! festival.

The 2013 Luminate film tour highlights the increasing influence of older cinemagoers and older artists in this often youth-orientated business. Both the films selected – The Best Exotic Marigold Hotel and This is Martin Bonner – have something to say to all of us about dealing with age and the ageing process.

In addition to the public programme, Luminate includes Outreach activities and performances that take the festival into care homes, sheltered housing communities and local groups across the country throughout October. This year’s Outreach programme includes a screening from the Luminate Film Tour at Viewpoint Housing in Edinburgh, selected by residents to share with their family and friends, and performances of Puppet State Theatre’s acclaimed production The Man Who Planted Trees in care settings across Tayside.

The Luminate 2013 programme is available online at www.luminatescotland.org and hard copies can be requested by emailing the Luminate team or calling 0131 668 8066.