Janelle Scotland, Chair of the Association of Scottish Talking Newspapers and Lothiansound, calls for help in attracting new listeners. 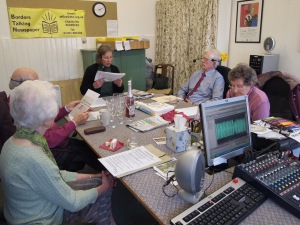 Talking newspapers record local news and distribute, free of charge, to people who cannot read print. Even the postage is free for registered blind and partially sighted people (thanks to the Post Office Articles for the Blind rules and regulations.)

There are 65 talking newspapers in Scotland. The Association of Scottish Talking Newspapers (ASTN) offers support and guidance to them and to any new groups thinking of starting up.  It organises training days, often specifically tailored to meet the needs of one group, and an annual conference attended by delegates from talking newspapers all over Scotland and associated organisations.

Despite the financial climate, funding for running or setting up talking newspapers does not seem to be difficult to find.  Perhaps this is because many of them exist in rural parts of the country where local businesses and clubs are most likely to help.

Raising awareness of talking newspapers seems to be the greatest difficulty.  Our potential listeners can’t read the notices in the library or optician’s waiting room so we have to rely on people like you to help us spread the news to others who may benefit from our service. ASTN encourages all talking newspapers to have a website.  This often attracts the attention of family and friends of blind and partially sighted people.

Last year, Lothiansound, an Edinburgh based talking newspaper, celebrated 25 years of delivering a weekly recording to hundreds of lsteners, mostly in the Lothians but as far afield as Malta. Their local MSP, Jim Eadie, secured a debate in the Scottish Parliament followed by a reception in honour of Lothiansound. Jim and three other MSPs, extolled the virtues of the talking newspaper service in Scotland and congratulated Lothiansound. If more MSPs would take an interest in their local talking newspaper, the ensuing publicity would help our cause.

Apart from a weekly CD of local news, Lothiansound has recently started to record a monthly CD of articles from the Scots Magazine. Copies of this can be request from Lothiansound on 0131 6612850 or by email to info@lothiansound.org.uk.

1 thought on “Spread the news about talking newspapers”