Hawick Senior Citizens Association’s Evergreen Hall is tucked away on Dovecote Street overlooking the River Teviot – but you will have no trouble finding the group with the clear shiny new sign that the group has just put up.  This is just one of the many recent changes that the group has undertaken – which together with larger structural changes for warmth and weatherproof – have created an inviting flexible space that is in constant use by the local community.

We were welcomed by the large friendly group into the newly insulated and plastered hall, to see phase two of the renovations which included new colour co-ordinated chairs, window and stage curtains that Age Scotland has helped fund.  We were fortunate to visit just before lunchtime on a Thursday – which is when  the Social Group meet for a nourishing and enjoyable lunch followed by a cup of tea and a blether.

The enthusiasm and energy which we witnessed over our meal – as we heard of the dances, indoor skittles and various events and activities the committees and volunteers run – was infectious; as were the inventive ideas for the usage and hiring of the hall and other fundraising ideas that have kept the group running since the 1960’s.

If you would like to find out more about the group’s activities or get involved contact George Brown,  Tel No: 01450 373829 email: george.brown732@btinternet.com

Find out more about Age Scotland’s work in the community

Galashiels Men’s Shed has been set up in record time by a hopeful bunch of people who sat together last November with the enthusiasm and commitment to create a place where men could come together share skills and interests, pursue hobbies and pastimes and have time for coffee and a chat. 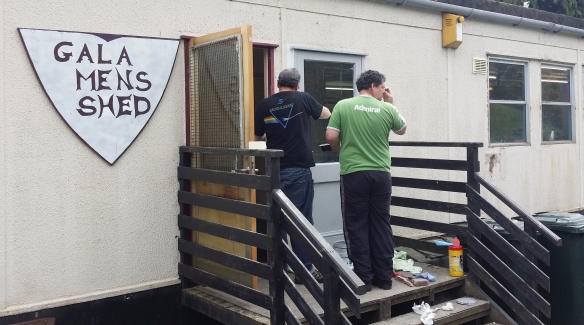 In January this year they started operating from just one small room – making bird boxes and planters for a new sensory garden for people who are blind or partially sighted.  But it soon became apparent interest in the group meant this room was too small and they persuaded the local council to give them a local premises which had been earmarked for demolition.

The group then took ownership of the premises in May this year and the Shedders have been working tirelessly to create a working space and socialising area, when we visited there were over a dozen men, some painting the building and some busy making their workshop benches.  Already they have a range of products that they have produced including garden chairs, bird tables, bird and bat boxes, and are also repairing bicycles  – and the local council has commissioned them to create planters for a common area in the Town Centre.

Its early days but this band of men – with ages ranging from 18 to 82 – with support from the Volunteer Centre Borders – have proven they have the drive to take things forward with an official launch event planned soon.

If you would like to find out more about the group or get involved contact: Nigel Sargent at Volunteer Centre Borders, Tel No: 0845 602 3921 email:  n.sargent@vcborders.org.uk

Find out more about Men’s Sheds on the Age Scotland website.

1 thought on “Day out in the Scottish Borders”