Walking football is a variant of traditional football aimed at keeping people aged 50+ involved with the sport if, due to a lack of mobility or for other reason, they are not able to play the traditional game. Yesterday saw the launch of Scotland’s first national Walking Football Network.

What is Walking Football?

Although it might not sound too energetic, Walking Football is an action packed game of football – just with no running or slide tackles. And if you run, you concede a free kick to the other side!

Walking Football is taking off with clubs across Scotland and is proving to be a popular way of staying involved with the sport. As well as allowing people to keep playing a sport they love, Walking Football is a great way to keep fit and active, socialise and has been shown to improve mental health and wellbeing.

The launch of the Walking Football Network

Age Scotland are working with Paths for All, Scottish Association for Mental Health, Scottish Football Association and the Scottish Professional Football League Trust to form the Walking Football Network in Scotland. Our role, alongside our partner organisations, will be to support and enable the development of the game across Scotland.

The Walking Football Network was officially launched yesterday at the Toryglen Regional Football Centre in Glasgow. The event, was attended by well known faces such as Chick Young (BBC Scotland), Jamie Hepburn (MSP), Humza Yousaf (MSP) and Ken Macintosh (MSP). It was kicked off by Archie MacPherson, the ‘voice’ of Scottish football and former Scottish FA chief executive Gordon Smith. 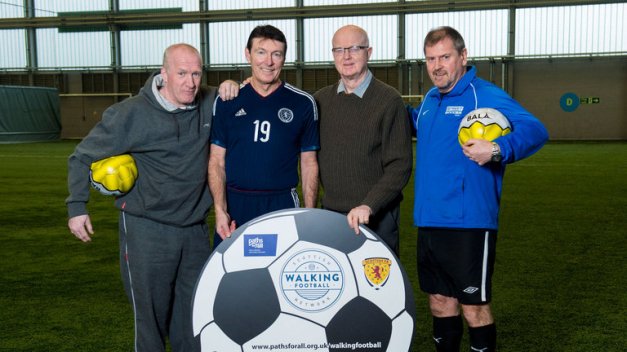 Age Scotland’s Chief Executive Brian Sloan said “Age Scotland are delighted to be a partner of the Walking Football Network and the launch yesterday was really enjoyable. Walking Football is a great way for people to keep involved in or rediscover the sport, but it really is more than just playing football.

Beyond being more physically active those taking part are able to socialise and make new friends, which helps to reduce social isolation and improve mental health and wellbeing. It’s a wonderful initiative to be a part of and we look forward to seeing more clubs developing across Scotland.”

Craig Brown, former Scotland manager encouraged everyone to give it a try “And for those who haven’t played for a number of years, what are you waiting for? Get those boots on and start scoring a few goals!” (read the full story about the launch at Sky Sports News.)

If you would like to get involved in Walking Football, just search for your local club or contact Billy Singh, Walking Football Development Officer by email or call 01259 218888.