Today kicks off Dementia Awareness Week in Scotland. Richard Baker, Team Leader of our Early Stage Dementia Project, talks tackling the stigma and how early diagnosis is key to living well with dementia.

This is a key concern for Age Scotland through the work of our Early Stage Dementia Project, supported by the Life Changes Trust. Early diagnosis for someone with dementia can make a huge difference to their ability to live well with the condition. The Scottish Government has made dementia a national priority, and as part of this has introduced a commitment to provide one year’s support for everybody who has been diagnosed with dementia for a year after their diagnosis. This support is provided by link workers who help people with dementia understand the illness, manage symptoms, maintain their connections with their local community and help them make plans for their future.

However, while there is a huge amount of work going on to raise dementia awareness and tackle stigma around the illness, there is still a huge amount to do. Depending on the measure used, either a third or a half of people who have dementia in Scotland have not yet received a diagnosis. A UK survey by the Alzheimer Society found that more than half of people seeking a diagnosis for dementia have delayed going to their GP by at least a year and nearly two-thirds of people fear a diagnosis would mean that their life is over.

But people can and do live well with dementia, and support in the early stages is crucial to ensuring this can happen. That is why it is so important to tackle myths and stigma around dementia and make more people aware of the benefits of early diagnosis. At Age Scotland we meet people with dementia who are still contributing to their communities and are the leading voices campaigning for improved dementia services. Their example shows that if people take early action if they are worried about their memory or struggling with other activities, they can still have a rewarding life even if they do receive a dementia diagnosis. Dementia Awareness Week is a great opportunity to highlight this message, and it is vital the work to make all our communities dementia friendly and dementia aware continues all year round. 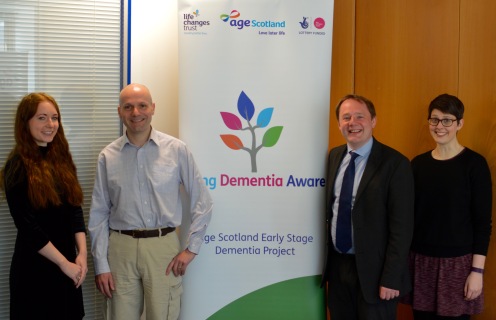 To find out more about Age Scotland’s work around Early Stage Dementia visit our website or contact Richard Baker at Richard.Baker@agescotland.org.uk

1 thought on “Living well with Dementia: diagnosis is key”